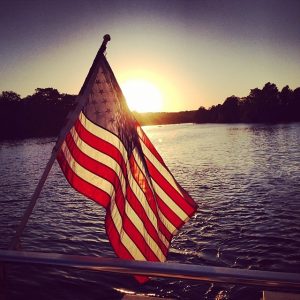 The Fourth of July has always been one of my favorite holidays. There are the obvious reasons: celebrating with friends and family in the warm summer air; burgers and dogs hot off the grill; sweet buttered corn on the cob; excited children swirling sparklers in the dark; and the booming fireworks that remind me of the battles fought years ago so that I could live free today. It makes me feel truly blessed and grateful to be American.

As the night sky lit up with exploding colors, I started to think about the meaning of ‘Independence.’ This year, that word takes on a whole new meaning as the vote on the GOP Healthcare bill looms days away. Very early on in my life, I had to be independent. From the time I graduated from high school, I supported myself. Minus financial aid, I put myself through college, paid my own rent and bought my own clothes and food. I was always a hustler and never took a handout. This is the case to this day. Everything I have, I have because I worked for it. I am proud of this fact.

But I would not be able to be so independent if I didn’t have health coverage. When I had spinal fusion back surgery in 2011, the first bill I received from the hospital was $170,000. At the time, it was more than double my editor’s salary. I remember calling my father hysterical. Thank goodness my insurance covered most of that bill. A year later, when I was diagnosed with breast cancer, my medical coverage allowed me to go to the best surgeons and hospitals in New York. Because of this, I was able to focus on my recovery, continue working during treatment, and maintain a relatively ‘normal’ life. Two years later, while in the middle of breast cancer reconstruction and freelancing to earn a living, my surgeries were covered by the Affordable Care Act (ObamaCare). Today, I am thriving because of the insurance I received. Good healthcare coverage was key to all of it.

But the GOP Healthcare bill will change all of this.

Under this new bill, my history of back surgery and cancer put me in the “pre-existing conditions” category. While the bill does preserve the pre-existing condition protections that exist in the ACA – insurance companies would have to offer a plan to people with medical problems – it has major pit falls. For example: If a state doesn’t include certain treatments or medicines in their benefits, then insurance companies can elect not to pay. Even if it means life or death to a patient. If the past is any indication, they won’t pay because your life isn’t more important than their profits.

Making matters more urgent and stressful for me, is that I am recently unemployed and find myself worrying about having health coverage. I am also recently engaged and I’ve had people suggest I elope so I can get on my fiancé’s insurance. What is this, 1950? I have to get married to ensure I have healthcare? That’s not what I want my wedding to be about. And I don’t want to be dependent on anybody. I want to be independent – the way I’ve been my entire life. Isn’t that what we should be striving for as a society? To empower people to take care of themselves – and when they get too sick they still have the resources to do so? That is what real independence is all about. It’s one of the things I love so much about America: that we care for each other and band together when in moments of crisis. That is what made America great in the first place.

As this majestic holiday comes to a close, I’m hoping that our elected officials also took a moment this July 4th to ponder the meaning of words like “freedom” and “independence.” I am also hoping they consider how the GOP healthcare bill will impact those basic American principles when they vote. My life, and many others, depend on it.

PS: It isn’t too late to act! Making a call to a Senator – not just those in your state – can make all the difference. Below is the link to all the Senate Contact Directory. Let your voice and opinion be heard!